Multilingualism as a key challenge for Open Science and Research Assessment

Making science open requires diverse, multilingual, and locally relevant research accessible for different audiences. The research assessment reform should recognize and reward researchers’ ongoing multilingual communication practices and address language biases in research metrics and expert-evaluation. This does not mean prioritizing local languages ​​over English, or translating all publications into different languages. Multilingualism in scholarly communication is relevant for all fields of science, including SSH.

In the ongoing European reform of the research assessment system, the call for multilingualism is the most notable and serious omission. Almost half of the Europeans are not able to speak any foreign language well enough to hold a conversation. Only a little more than one-third are able to do so in English (the most widely spoken foreign language). Thus, if research is communicated exclusively in English, it is inherently limited.

This is apparent during the COVID-19 pandemic, in Europe and globally. We observe a widespread need for scholarly communication, not only between researchers, but to enable research to reach decision-makers, professionals, and citizens. We are about to achieve open access to research publications, but our societies are not fully able to use them. This problem can only be solved if research is communicated in multiple languages, including those actually used in speech and writing locally.

Call to recognize the ongoing practice of multilingual publishing

Instead of prioritizing local languages ​​over English, this is a call to recognize that the quality of research does not depend on whether the research is communicated in English. Multilingualism in scholarly communication is an ongoing practice, and it is time to fully recognize and reward this invaluable practice through research assessment.

In the SSH, scholars study societies and describe them using their own words. Thus, local languages are needed to express the entire cultural and historical heritage and context of research. In many so-called STEM disciplines like physics or chemistry research is often less context-specific, and it can be expressed in fewer words with figures, charts, and formulas.

As the evidence-based picture of European publishing practices shows, researchers in the humanities and the social sciences (SSH) are multilingual. It needs to be emphasized, however, that multilingualism in scholarly scholarly communication is relevant for all fields of science, not only SSH (Figure 1). 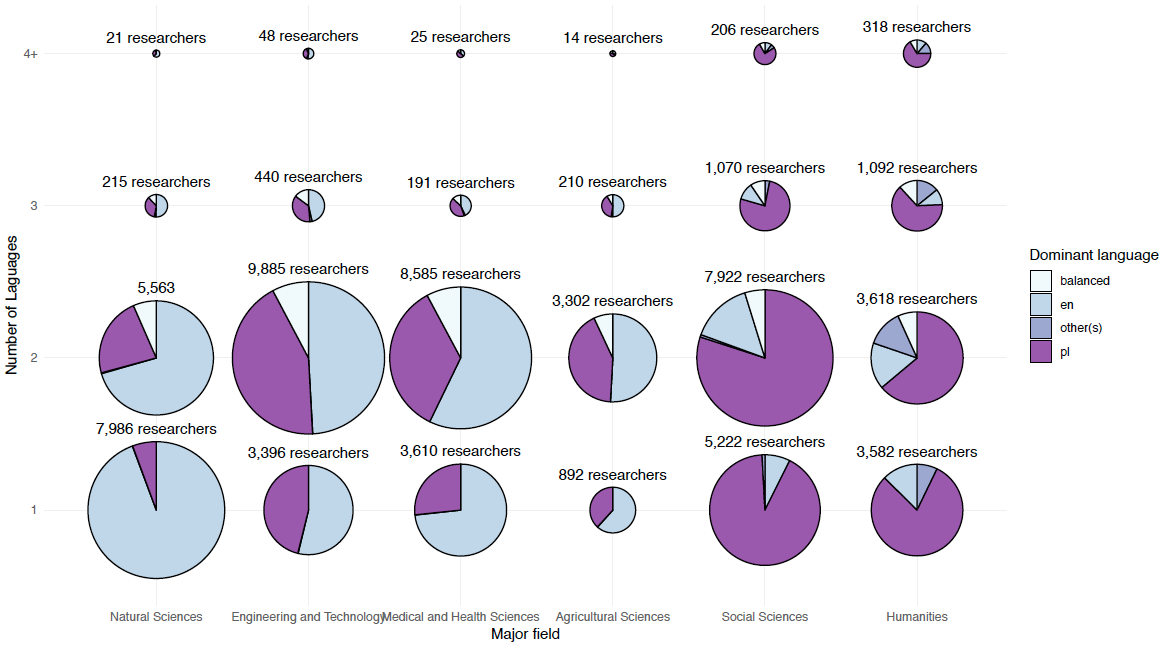 How to make multilingualism part of the research assessment reform?

All actors involved in research assessment should make sure that in the process of expert-based evaluation, high-quality research is valued regardless of the publishing language or publication channel. Thus, the selection of evaluators and their language skills should be a relevant concern in assessments.

Moreover, when metrics-based systems are utilized, journal and book publications in all languages should be adequately taken into account. It needs to be recognized that research published in languages other than English is very poorly represented in the largest international citation indexes, such as Web of Science and Scopus, which cover mainly research from international journals published in English.

Many decades ago, we gave away, as researchers, the publishing of journals and books to small commercial publishers. This was a well-functioning relationship for a long time, but today 75 % of European spending on scientific journals goes to the ”big five” publishers. On top of this we can see new mega publishers emerge from the new author payment -model (APC) for open access.

The commercial mega publishers treat publishing research mostly as a means of increasing profits, thereby demolishing the idea of open science. In such a business model, multilingualism is just an obstacle because it is easier to publish and sustain infrastructure only in English.

Major corporations and international publishers operate according to market laws favoring English over local publication languages, because they want to target the largest possible number of users and translate mostly from English to other languages. Languages with fewer users are overlooked and become invisible.

The losers are both scientists and citizens. Therefore, reclaiming key communication channels and owning them by the academic community and learned societies is a crucial step in maintaining and achieving the goals of open science. Only in this way will we be able to fully open up the publications and their metadata used in the research assessment.

The Helsinki-Initiative stresses that to achieve a fully open science and multilingual scholarly publishing, national journals and book publishers need to be safeguarded in their transition to open access. Policymakers and the academic community must make sure that not-for-profit journals and book publishers have both sufficient resources and the support needed to maintain high standards of quality control and research integrity.